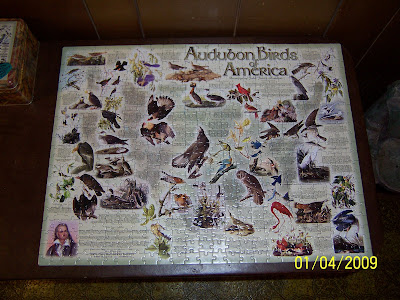 Over the New Year's Holiday we decided to put together a jigsaw puzzle as a family activity. This was one we had gotten as a gift from mrangelmeg's cousin a few year's back, and had never gotten around to doing so we set it out on a card table in the dining room and worked on it over the next few days until we got it finished.

Mrangelmeg did quite a bit of the work on it, but I did my share, and the angelbaby did quite a bit of piecing in heads of birds and wings and such around the puzzle. Even the two middle daughter's helped, so it was practically a family affair, except for son and heir, but puzzles just aren't his thing.

We enjoyed that one so much that we got another one out today and are going to do it. It may take a while longer, there are 1000 pieces to the new puzzle, and the pieces are much smaller. It is a Mary Poppin's painting by Peter Ellenshaw. I will post a picture of it when we get it completed.

h/t to Suzanne for the idea of sharing my puzzle picture.