Posted by Unknown at 5:15 PM No comments:

I don't have much time. I took a longer walk this morning, and only have a few minutes before I have to dash off (late )to my first session of the day.

I walked through the river park this morning and by the Holocaust memorial (I will post the video later when I get home. ) and then because I was so far down the park I decided to walk back through the French Quarter. That was such an interesting experience. At one point I passed a biker bar that was still really hopping at 7:20 in the morning.

As I turned back toward Canal Street I happened to pass a little Catholic Mission Church that was just beginning 7:30 Mass, Since the bells were ringing and everyone was walking in, I figured that it was a test. I could go in and go to Mass and still make it to most of my morning session. So I did. I am so glad I did.

The congregation was predominately African-American, so needless to say, the music was amazing. The priest was a mission priest who had such a heart for his people, (and The New Orleans Saints apparently as we prayed for them repeatedly throughout the service).

I felt myself welling up with tears at least four times during the service: once because I felt so at home; once because of a touching prayer of the faithful that I felt was directed at my present need in my dark night; once when the entire congregation gathered at the center of the church holding hands to sing an amazing rendition of the Our Father together as One Voice; and once as I walked up to receive communion and got a closer look at all of the beautiful statues surrounding the side altars. (I will post those as well.)

I really believe that God sent me in that direction this morning. My steps were carefully ordered. I could have gone in so many other directions. I had planned to walk toward the Warehouse district to take pictures of some buildings we saw last night on our way to dinner, but at the last minute changed my direction for no reason other than the movement of The Spirit.

I have a lot to be thankful for this trip, and a lot to think about today.

God is so good, all of the time.

God isn't speaking to me in words.
I may have told you this before.
When I pray I either get great gaping silence:

or I get images. The problem with the images is that I don't know what they mean. It is like picking up a knitting project only to find that my yarn is all tangled into a huge mess. Where do you start when what you find is this? 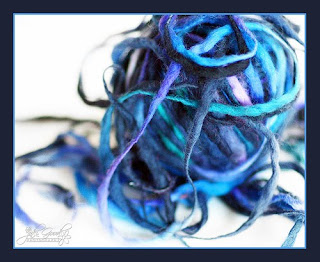 I know that I am not sure where to begin. I just drop the work in frustration and move on to something else.

I should, I suppose be happy that I am aware that God is close to me. There are those who are in the dark night of the soul who don't have that awareness.

Where I used to feel that I could float forever on the warmth of the ocean of mercy that is my Loving God. Now I feel as though I am being pulled under, and I am struggling, gasping for breath as I submerge, struggling against whatever change is coming. Then today it occurred to me that I should just cooperate.

One of my friends said something though that really gave me pause. I am struggling because I am still trying to do this, whatever it is that is happening, whatever is causing such chaos inside of me. Perhaps my response should be that I should stop doing, and let God take over completely. Maybe that is why it is such a struggle; because I am "trying to help."

If I surrender completely to the change and get out of God's way maybe the change can happen more easily and there won't be as much struggle. Maybe the knot will unravel itself if I just leave it alone instead of trying so hard to untangle the ends.

Something to think about . . . in the silence.

Pax
Posted by Unknown at 6:03 PM No comments:

Apparently, it is only Tolerance if we believe what they want us to believe.

It has begun in Massachusetts.

A Christan gentleman was fired from his job for stating his belief that homosexuality is wrong after being repeatedly pressed on the topic by a manager from another store on the announcement that she was going to "marry her fiance", another woman.

According to the HR department of his company his beliefs amounted to harassment.

You can read the story here.

I agree with this gentleman. If homosexual marriage is passed in more states anyone who feels as though homosexuality is morally wrong will face the dilemma of keeping silent or facing the loss of their job for stating their personal belief.

So much for tolerance, apparently it only goes one way. Keep your job by keeping your beliefs to yourself.


h/t to my pal Diane from Gradual School via email.

Pax
Posted by Unknown at 6:08 PM No comments:

A Daily Moment Of Grace

For about ten months I have subscribed to an email list that sends a daily message of hope and encouragement to my walk of faith.

Each of these quotes comes from a Saint or other inspirational person who has lived in the world. There have been moments when the message spoke exactly to where my life was at that point in time; as if the Divine Physician were sending a healing balm meant just for me. At other moments the message has been one that has challenged me to be better, stronger, and more radical in my call to follow not only God's will, but the universal call to holiness, peace and sisterhood/brotherhood.


Yesterday, for instance was one of those days when the message hit me like a celestial arrow considering what happened in Texas at Fort Hood. The message was this:

Let us not tire of preaching love;
it is the force that will overcome the world.
- Archbishop Oscar Romero (1917-1980) Martyr

And if that weren't enough balm for a weary soul, We just had to look to Wednesday's message to find our marching orders:

The good we accomplish is not through the action of ourselves, as
much as it is through the spiritual pressure of God's grace. All we have to do
is create a vacuum, to count ourselves as nothing, and immediately God fills our
soul with His power and truth. - Archbishop Fulton J. Sheen

I just wanted to share something with all of you that has helped me so much and takes such a little moment of my time each day to read and absorb. If you would like for this email to brighten your day just click on the link below give them your email address and hit the subscribe button. .and start receiving a moment of grace each day.

GoodNews.net has many other lists that you may join if you like, just go to their main website and you can find many others from which to choose.

Pax
Posted by Unknown at 8:29 AM No comments:

Gonna Get All Political For a Minute

I have been hearing a lot lately about a treaty that will be signed at the Copenhagen Climate Change Conference.


This is the first article that I think has begun to unravel exactly what the treaty is really about.

I think you might want to take a look at the treaty for yourself, before December 7th, and decide what your opinion is concerning whether our president should sign such a document which would make it the responsibility of the United States (among other developed countries) to make reparation payments to developing countries for past carbon emissions. (Just one of the ways the US will be made to pay in the treaty).

This will amount to taxation without representation because this "tax" will be levied by the UN and we as a people will not be able to have any say in how this is levied or collected. It seems to me, the last time that happened to us there was a little bit of a revolution.

If this doesn't sound right to you, make your voice heard before our president signs our constitutional right to representation away, because if he does sign this treaty it will supersede our constitution.

(stepping down off my soap box now.)

Mystic Monday: Take Another Look at The Cloud

Today dear children we are going to take another look at The Cloud of Unknowing.

Mostly because I spent the weekend rereading it for my own benefit, so it is fresh in my mind. I wanted to focus on one little part. It may not make sense to some of you, or it may speak directly to the hearts of some of you. If it does, great. If it doesn't just let it go.

Anyone who aspires to contemplation aught to cultivate Study, Reflection and Prayer or to put it differently, reading, thinking, or praying. . . these three are so interdependent that thinking is impossible without first reading or - what amounts to the same thing- having listened to others read. For reading and listening are really one; the priests learn from reading books and the unschooled learn from the priests who preach the word of God.

Beginners and those a little advanced who do not make the effort to ponder God's word should not be surprised if they are unable to pray. Experience bears this out. God's word, written or spoken is like a mirror. Reason is your spiritual eye and conscience your spiritual reflection.

This has adult content, but thanks to Paul and Storm a funny look at the rush to begin the Christmas Season.

Remember kids, we don't decorate until the third Sunday of Advent, the Same Sunday that we begin the O Antiphons. Anticipation is everything.

Pax
Posted by Unknown at 2:04 PM No comments: