Tomorrow is the first day of National Novel Writer's Month.  This is the first year since I found out about this fun idea that I actually have the time and the inclination to participate.  I have my outline for the novel I have been trying to write since the middle of Gradual School and I am going to start tomorrow and get it written.

You can follow my progress on the widget on my sidebar, which shows my word-count for each day of the challenge.  I am going to try to write each and every day and really get this thing going.

Hopefully someday you will be reading my novel on your Kindle, or in a real book form.

Hey, It could happen.

Feast of Teresa of Avila

Today is the Feast day of Teresa of Avila.  This is a famous statue of Teresa called Teresa in Ecstasy.

If you have a real interest in the spiritual life and have never read Interior Castle I would encourage you to give it a try.

I will also add the caveat that Teresa didn't really want to write this wonderful book, and it shows in the end product.   It is the most wonderfully meandering narrative.   If you can stay with her though you are rewarded with a journey through the interior life to full communion with God.

Teresa was a Saint, and a Dr. of the Church, but she was also wonderfully human.  She was a very adamant proponent of praying exactly where one is to God,  with boldness and candor.  One of my favorite of her prayers is:  "If this is the way You treat your friends, it is no wonder You have so few of them."

In honor of P. G. Wodehouse's Birthday I am reposting this wonderful spot on the interweb.


Knock yourself out, wandering thorough some wonderfully witty Wodehouse tidbits.

This article about the rescue of the Chilean Miners is absolutely amazing, but then so is our God.

Out of the Depths

How powerful prayer can be,  and what a testament to the power of everyone working together not just on the technical side but on the spiritual side as well.

During this month where everyone is trying to bring to the forefront the importance of self examination, and early detection in the fight against breast cancer,  I feel it is also important to make people aware of all the risk factors.

There is one that even the American Cancer Society itself has tried to deny repeatedly;  the link between abortion and breast caner.  In fact one of my high school classmates had a very heated exchange on my Facebook page the other day because I tried to post some information about this link.  I believe that there is such a link because of all of the things I have read over the years, and not just because I am against abortion for moral reasons.

In 2009 the American Cancer Society finally began to soften its position, and under the weight of incontrovertible and verifiable proof, does now say that there is a link between abortion and increased risk of breast cancer.  Read the article here.

I believe that women must understand and be aware of all risk factors in order to make informed decisions about their health choices.

Pax
Posted by Unknown at 1:12 PM No comments: 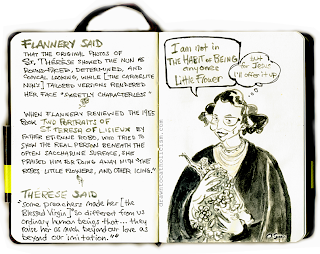 My friend Owen has done an amazing post today for the feast of St. Therese. When you read the Flannery O'Connor remember to use your best southern accent because then it sounds so amazing!  Click on this link to read the rest of his post.
Keep up the good work Owen.
If you aren't following Owen's blog you should be.
Pax
Posted by Unknown at 9:39 PM 1 comment:

Grief Support Just When I Need It

So, I though I was doing pretty well.  I was finding the time to get things done, and don't feel as though I am living underwater most of the time anymore (swimmers might understand that reference but it is the best metaphor for how I felt the first two or three weeks after mom died -- as though I were totally submerged in water and the rest of the world was somewhere on dry land.  I could see it and hear it but only in a diffuse, muffled way.)

I am still taking naps every day, but to be honest I enjoy my nap time and they aren't interfering with my other commitments so I think I will continue them.

I was at a really low point one day.  It suddenly hit me that I am an orphan now, because both of my parents are dead.  Why at fifty years old that should even be a thought that would cause me any concern seemed to make my sorrow even more deep.  As I was sitting in my grief that day, I received a letter from a beautiful woman in her early 70's who was part of my Spiritual Direction Internship Cohort Group.  In the letter she reminded me that we had decided that she was my adopted mother, and while she could never take mom's place, she would gladly step in and send me the love, and motherly concern that she knew I was missing.  How carefully God orders our steps.  Her letter came that day because she had been traveling when mom died and had only that week had the time to sit down and write.

Just this week, I have been reading a book called Availability by Robert Wicks.

I got to church a little early on Wednesday morning so I was reading in Church.  As I read a section on allowing one's self to be open to God's love, it occurred to me that I had been experiencing a really dry spell during my prayer time --a long stretch of withdrawn consolation in prayer.  It hadn't stopped me from spending my time in contemplation, I just come away feeling empty rather than refreshed or restored.  As that realization swept over me I could feel my eyes filling up with tears.  Then, Mass began and it was announced that it was the Feast of the Archangels (Michael, Raphael and Gabriel).  This day happens to be my father's feast day.  The tears really began to flow.

Fr. Bill, our pastor must have noticed, because when I ran into him going into the parish office the next day he made a point of asking me if I was okay.  He has a way of drawing the truth out of me, (I wonder if that is so for everyone he talks with) so instead of saying "things are just fine"  I actually told him that I was still struggling a bit.  He gave me a few really great pearls of wisdom about grieving.  The most important for me at least being that walking through grief is like entering a valley.  You walk along the valley floor for a long time before you begin to climb back out of the valley on the other side.

Another piece of wisdom came on an unrelated subject from friends in my supervision group .  When I am done crying, I will move on.  The crying has a purpose.  I have known the grace of tears,  but somehow was hard pressed to offer that grace to myself in this situation.

So, the valley may be long, and deep, and filled with suddenly flowing tears, but I know that with friends like these surrounding me I will make it to the other side and my joy will return.