What a Way to Spend a Few(?) Hours 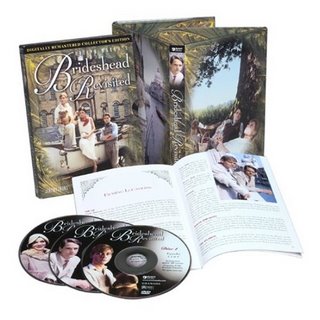 I have spent 13 precious hours since Friday watching (or I should say re-watching) Brideshead Revisited the Granada Television mini-series from 1981. I had been looking for it in my parish video library; someone had it checked out since March and hadn't returned it yet. I had actually seen all of the episodes when they were originally shown on Public Television, but since then I have become reacquainted with Evelyn Waugh's writings and I couldn't remember how well the series had portrayed the characters as Waugh had written them.

So, when I found out that my parish video library had a copy of the DVD set I couldn't wait to see it again. But then, I had to wait, because every week when I went to check it was still not there.

Well, finally on Friday after Mass, my persistence was rewarded, and it had been returned. I tried to squeeze out an hour here or there over the weekend so that I could see each of the eleven episodes. Luckily today I was supposed to go out of town but my trip got canceled, so while I was doing laundry I got to watch the remaining episodes.

This was about as flawless a piece of adaptation as one could make from page to screen. I read somewhere that they had intended to do only 6 hours, but because of a strike that delayed production, after looking at what had already been shot, they decided to take advantage of the work stoppage and asked John Mortimer to expand the script to the final 13 hour epic. Having seen all 13 hours I can't imagine what they could have cut.

As a portrait of the Church there is so much that was left intact from the book. One can actually visualize Charles' journey from unbelief to belief, and how the Flyte family members represent points of attraction and revulsion to the Church for him. It really does represent the entire cross section of Catholics in the world in one family. Come to think of it, that same cross section of Catholics could probably be found in my own family, even dear sad Rex, whose insistent need to join the church led to his willingness to try to believe anything he was told.

It says on IMDB that there is another version in development, set to come out in 2008. I can't imagine why anyone would consider trying to remake something that was so well made the first time around.

Anyway, now that I have seen the mini-series again, I suppose I will have to get out my copy of the book and re-read the novel. Ah, what joy.

I am glad that you managed to get this checked out again. Everytime I went back to get it, it was not in. When you are done, I would like to view it. It might be better if I wait until the colder months though and this remodeling is done. I had alot of discussions with Father Don about this as I viewed it before and I want to go back and see some things he told me to look for and think about. Glad you enjoyed it so much.