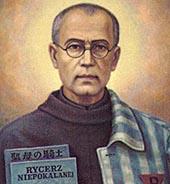 On the day that Maximillian Kolbe was canonized, October 10, 1982 two young college kids went to mass together for the very first time at St. Benedict Catholic Church in Terre Haute Indiana. This was my parish church, and I had invited a young man from the nearby engineering school to attend Mass there because he was complaining about how liberal the campus ministry church was. I had long ago abandoned that church which I affectionately called "Our Lady of hte Nuclear Winter" for the much more conservative family of St. Ben's. It so happened, that my mom was also a member of the parish and after Mass, she invited us to come to her house for breakfast, and since we were both poor college students, we took her up on her offer, and my new friend and I went for a free meal.

St Ben's happened to be a Franciscan Parish, and since St. Max was one of their own, they were having a parish wide party to celebrate the happy event. Since we were both poor college kids, we decided we couln't pass up another free meal, so we attended the gala event and were well fed and learned so much about St Max that he became a very special friend to the both of us from that very day.

A week later, that young man and I went on our first official date, and a month and two days later we were engaged, and 23 years later we still celebrate the day that St. Max brought us to Church together before we even went on a date, or kissed.

Not a bad start for a Catholic Courtship, especially in the early 80's.