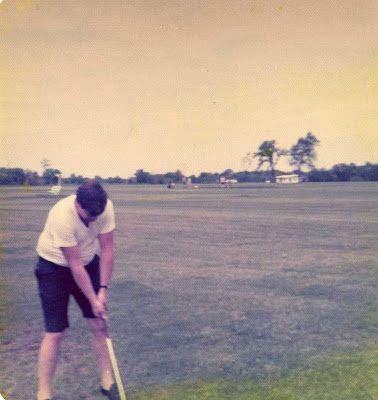 My dad was a golfer. He called himself a "duffer" but he played pretty well considering he picked the game up as an adult and was a lefty but he played right handed because he couldn't afford a set of left handed clubs.

My favorite thing to do on summer days was to follow him around our little nine hole golf course at the "club" we belonged to when I was growing up.

There was one pretty easy par three on the course that he would let me play. He would let me hit off the tee, and hit once on the fairway and then I would pick up my ball and drop it on the green and then I could putt it three times. If I didn't get it in in three putts he made me pick it up.

I never played very well, but I always had fun. Sadly, that all ended when my dad got sick when I was 12, and then he died a year later.

My husband loves golf just as much as my father did. Only mrangelmeg is a righty, and has been playing golf since he was a little boy. 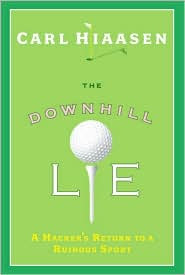 The girls got mrangelmeg this book for Father's day:

It looks like a book my Father would have liked had he stayed alive long enough. I wish mrangelmeg had had a chance to meet my father, they might have been great golfing buddies.

Happy Father's day to all you Father's out there.

Hey girl! You found me out! Hee!
I'm glad...I was gonna get to you too or tell you when you got home. Beside, remember, I'm not talking...you took off without me being in the flippin trunk!!! BWAH!
How's Floridy, the sunsets, the waves, the breeze, the food, the soft sand between your toes after it cools down from the sun, such as in the morning with your first cup o coffee?!!! Huh? Come on tell me about it..spare me nuthin!
Then I'll tell you that I am thankful for life and we had a nice Father's Day and Shane just got back from Brute Days and we are all working and the parish picnic is next weekend and we'll miss you and there was the cutest picture of you and Aaron in the bulletin this past weekend with your little smart caps on! So, yeah, you go ahead lay out there and smell that breeze, pick up some shells and just don't get snipped by a stingray!
I still love ya, though! me