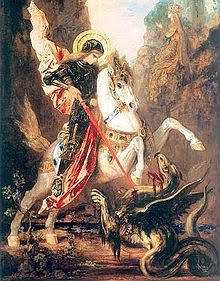 Today our Calendar celebrates the feast of St. George. Patron Saint of England, and fighter of a dragon, or so the story goes.

Fr. had a really good homily about that today at the children's mass. You see, the story says that the dragon lived outside the town and the only way the townsfolk could get to their water supply was to "feed the dragon"; first sheep, but then when the sheep supply ran out they began to feed it their children. They cast lots to decide which children would be fed to the dragon.

Fr. said that the dragon was a metaphor for all the evil things that take away the good in our lives. We have to "feed the evil" and it continues to thrives so long as we feed it. It becomes more destructive and more greedy, asking more and more of us.

St. George didn't kill the dragon though. He tamed it. He told the people that there was only one way that the dragon would flee from their homeland, never to return. They had to accept Christ as their savior and be baptized, for Christ has promised that nothing that is His will ever be lost. (John 18:9). The story goes on to say that thousands were converted on that day and "the dragon" was never a problem for them ever again.

A while back one of our instructors read a children's book that made this exact point. It was called You've Got Dragons, by Katherine Cave and Nick Marland. 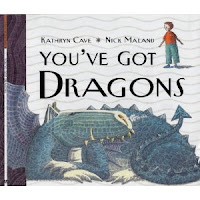 What are "the dragons" in your life that you must feed? If you simply turn this over to Jesus, and trust that He will protect you, can you have faith that your dragons will be tamed, and then sent away?